Please excuse us as we are redeveloping our website. Thank you!

The Artist needs but a roof, a crust of bread, and his easel, and all the rest God gives him in abundance. He must live to paint and not paint to live.

A house called Eliphante is featured in a fascinating survey of idiosyncratic, intriguing dwellings, strewn across the U.S., all designed and built by unforgettable artisans…home-dwellers yearning to be free.

It is clear that the writers chose this highly eccentric, kaleidoscopic house, composed, one is tempted to say orchestrated, by the artist Michael Kahn, as the introduction to their entire book chiefly because the place is, far and away, the most incomparable among the thirteen houses in their survey. 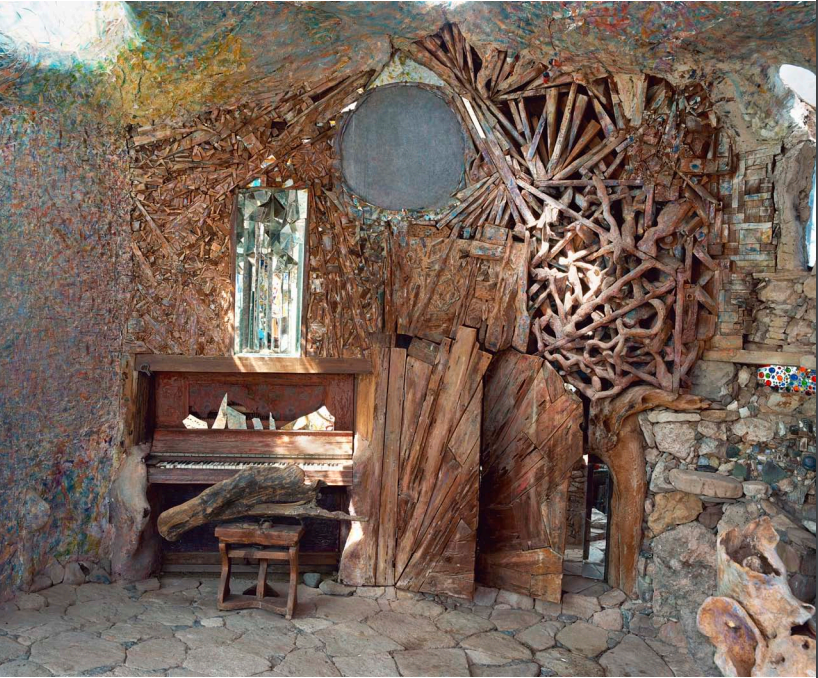 Much more an art installation than a mere residence, in any conventional sense, the Arizona desert shelter that artist Kahn, and his wife, Leda Livant, fabricated from driftwood, salvaged glass, ferro-cement and diverse found materials came to resemble, forcefully, though not intentionally, the fantastical, convoluted creations of Barcelona s great Art nouveau architect, Antonio Gaudi. Eliphante might bring to mind the German Dada artist, Kurt Schwitters, and his legendary Merzbau, destroyed alas in 1943, which was a veritable walk-in collage, or environmental-scaled assemblage, cobbled together from scavenged materials. For decades, eccentric Eliphante also housed, in a makeshift, chronologically organized gallery, a retrospective exhibition of Kahn’s paintings, from the 60s through the 90s, i.e. almost until his death. It is as though one suddenly encountered an orderly painting exhibition installed in the depths of a coral reef. Kahn dubbed it his Pipedreams Gallery.

For an outsider art critic, an encounter with Michael Kahn’s work from a scant few decades seems somehow inextricable from the presumably overwhelming impact of the artist s Eliphante milieu. The artist would alas remain effectively undiscovered, moreover, not unlike all too many artists too proud, or willful, to interact with any art galleries who might have promoted them and their enterprise. Michael Kahn categorically chose to live to paint and not paint to live. Today, that gallery of unsung work is safely housed and cataloged in a house in Santa Fe. This publication, the first of Kahn’s entire career as an artist, has been conceived to bring his considerable gifts to the attention of the sort of public the artist – regrettably – eschewed in his lifetime. We are confident the images will admirably attest to his lusty, renegade talent.

Freshly completing his bachelor’s at the University of California, Santa Barbara, in 1958, the young Michael Kahn took a spontaneous trip to New Orleans, a place that has often cast its artistic spell over countless visitors. For Kahn, that visit proved fateful, for an encounter with an open-air artist there galvanized the artist in him, for the first time. He would not stop painting for the next 49 years; as his widow has said, thenceforth Art always showed him the way. That very autumn, Kahn took the leap into the premier art teaching environment of those days, enrolling first at New York’s Art Students League and, then, for a brief time at the city’s National Academy of Design. Not too much is known of his instruction in those years, but we do know that Kahn studied with one of the leading American Impressionist leaning painters, Frank Mason, as well as with the portraitist, Ivan Olinsky.

For a spell, Kahn was dedicated to working in a vaguely Impressionist manner, as is evident in works like Central Park, of that period. The young artist’s commitment to the Impressionist mode was at the outset apparently so profound that Mike felt compelled to join with other artists in the early 60s, in picketing the Museum of Modern Art, protesting its championing of non-objective and abstract art. Central Park, with its hazy echoes of J. Alden Weir or Willard Metcalf, would indeed be a far cry from the tumult and ferocity of the Abstract Expressionism, which was, at that very time, co-opting all critical approbation in New York. It is provocative to remember that Ab Ex was not the only art phenomenon that had taken New York by storm in the 50s.

Another possible influence that may have intrigued Michael Kahn might have been all the excitement, in the years 55-59, surrounding the rediscovery of the grand, late paintings of the preeminent Impressionist, Claude Monet. In those years, a fire destroyed MoMA’s large Monet landscapes and, in an effort to recoup the loss, the museum then purchased their spectacular Water Lilies triptych of Monet. Many saw in these swirling, atmospheric compositions, with their wild, gestural freedom, the impulse towards abstraction. Might Kahn have also seen and thought about those works as dramatic formulations of impressionism excitingly engaging with the non-objectivism he had previously protested?

Kahn soon made a predictable Impressionist’s pilgrimage to the painting mecca of Provincetown, Massachusetts, where he garnered more technique studying with Henry Hensche, who taught how to capture landscape in the envelope of light and atmosphere exalted by all the Impressionists, European as well as American. At this time, Kahn met his first wife Debbie, who was a potter, and through her he learned to be both bold and proficient in the area of hand-built ceramics. This skill would be apparent influence on the progress and development of his painting thereafter.

Kahn’s Red Dunes, from the Provincetown years, shows his skill at capturing the salt-air lighting of the dunescape there. We can almost hear the muffled sound of surf just over the hill. Two of the artist’s Self-Portraits, of that period, likewise recall the introspection and idyllic tone of many classic Impressionism portraits. Additionally, and provocatively, the figure of the artist appears almost to be slipping out of sight, retreating from the light into shadow, as though fleeing the viewer’s gaze.

In the latter 60s in Provincetown, Kahn’s work began to change. As he quite uncharacteristically wrote down, “while I was working on a large figure drawing, I began to feel as if my hand was being pulled by a magnet, the work developing in opposition to my conscious intent, turning into abstraction.” That compulsive turn to abstraction is abundantly evident in his work during the later 1960’s as the tumbling nude figures devolve, from image to image, into what was to become a kind of signature abstract compositional trope, i.e. a whirling maelstrom of light and color. Other canvases that followed on the heels of that breakthrough moment show the artist very confidently translating his motif into a recurrent, circular vortex of splintered light and color.

“From then on,” as Kahn said, “rather than intention, control, and seeking result, there was freedom, exploration and discovery, often with techniques and methods previously untried…” He went on: “After the beginning stage (covering the canvas), the expression of energy changed; I would become receptive…to respond to the painting…telling me what to do.” Such a compulsive method would henceforth, in the 70s and beyond, be the fulcrum of Kahn’s artistic output. It was in those days that the pioneer gallerist, Betty Parsons, strongly reacted to the new work by Kahn, remarking she could use five more like this. These were, unfortunately, fatal words for Michael Kahn – he declined her offer, saying he could not repeat or have his work dictated. It is in passing up such shining hours that Kahn would determine the future course of his solitudinous career.

True to his profound bohemianism (i.e. as the dictionary tells us, living an unconventional lifestyle), Kahn’s latter career was in great part hermetic, that is, until a somewhat fateful, final retrospective show, in 1991, at Northern Arizona University. That exhibition, cryptically entitled, by Kahn, An Artist Never Learns How to… an environmental installation of his paintings, involving undulating, Mylar walls and the like, was abruptly shut down when the artist refused to adhere to the fire exit signage legally required in the galleries. Among many things many an artist never learns how to is to bend to such exigencies.

Thus, through the 70s and into the 80s, after their move to Northern Arizona, “Kahn – variously influenced,” as Livant says, “by things like Esalen, Krishnamurti, Zen, and quantum physics, – danced with the brush, constantly painted with unbound energy and intense focus, and was always positive and upbeat.” As Livant emphasizes, music played a prominent role: “Kahn would paint to the diverse soundtracks of Glenn Gould’s Goldberg Variations, Keith Jarrett’s jazz, and Beethoven’s late quartets.” To the trained eye, it is clear that Kahn’s work in those years, up to his death, was indubitably impelled by the example of Jackson Pollock. That is, from Ancramdale (1973) onwards, Kahn’s practice was to dance around the canvas – all paintings were painted turning the canvas, i.e. “there was no true up or down,” as he put it. Such an obsessive dance by Jackson Pollock was famously recorded, in fact. Unfortunately, no such performance by Kahn was captured!

Looking at Kahn’s late works, which were surfaces of dense and heavily worked impastos which evoked clouds of stardust or the texture of the earth itself, we can perhaps see what the great art patroness, and friend and acquaintance of Kahn, Flora Biddle had to say to the artist, about a work she and her husband, Sydney, had hung in their home: “Your painting glows on our wall and makes us feel more alive, more aware. Sometimes its surface glitters with magical energy, sometimes we see dark pathways of life and death within the spinning universe of colors, and sometimes a microscopic life of atoms and electrons appears and we can almost hear the music of the spheres.” It remains that that music of the spheres may perhaps now, after his death, be made known to a larger audience. Such is the goal of this undertaking.

The artist Michael Kahn spent 30 years of his life creating, while painting and residing at, the three acres known as Eliphante. The buildings and structures at Eliphante, while expressions of creativity and artistry, were also Michael’s solutions to the practical needs for work space, studios, shelter and housing for himself and his wife Leda. Michael lived there until his death in 2007. Leda remained there until 2009, and now lives in Cottonwood, Arizona.

Today, the re-titled Eliphante Village site in Cornville, Arizona, is under the directorship of new caregivers, and has entered a different chapter focused on priorities of gatherings, art, ecology and community minded services and projects.

The 800+ works of art comprising the Michael Kahn Collection, now housed in Santa Fe, New Mexico, are under the care and ownership of Peter Ader, Don Smalley, and Kahn’s widow, Leda Livant Kahn.

Other than the history, legacy, and countless warm memories, the Michael Kahn Collection of Paintings has no connection to today’s Eliphante Village.

Eliphante is a private residence and not open to the public.

A Brief History of Eliphante

In the late 1970’s, Michael Kahn and Leda Livant, while li